What I'm Reading This Month

What I'm Reading This Month

I've earned fifty lashes with a wet noodle for not only failing to post one of these in January, but also being unable to recall with anything approaching accuracy what excactly I read last month. And if I post something inaccurate, perish forfend. A living human might accidentally stumble upon this blog. So here's February's, for which I can vouch.

Culture of Complaint by Robert Hughes

I actually just finished this one this morning, so I can give it my wholehearted and enthusiastic recommendation. It's an eloquent and pithy critique of American culture in the 1990s, and much of its deliciously quotable content still holds true today, if a bit understated. The author was an art critic for Time magazine and had written several other books whose topics didn't interest me nearly as much as this one. (I think I bought it based on the automatically-generated recommendations at amazon.jp.) He is originally Australian, which perhaps puts him in a better position to see the lunancy of American society than a native--even one who has lived in a different country for a couple decades and still looks across the pond with an unshakable conviction that his place of origin is exceedingly odd.

The title refers partly to tendencies in American art world to compete for paltry government subsidy by playing up the zeitgeist of multiculturalism, itself a nebulous concept, and the perpetual litigation between 'right' and 'left' focusing on contemporary art, each side complaining about the other side's tactics to acheive its political ends (more votes and more power). Hughes gives both the Democratic and Republican parties a fair and skillfully lambasting, and points out that the legacy of Ronald Reagan (who was, by the way, the greatest president in my lifetime, which says quite a bit about most American presidents) was to 'educate the country down to his level', leaving the US a tad stupider in 1998 than it was in 1994. This is a classic, meaning a book lots of people want to have read, but few want to actually read. Like so many books in my library, I waited a long time before giving it the old college try. What put me off is that it's thick enough to stun an ox, but in all honesty it's well worth it. No other author that I've ever heard of has so thoroughly and completely debunked the notion that socialist economic policies produce any kind of good result at all. After him was named the vibrant Mises Institute, whose web site is updated daily with the musings of a multitude of economists of the 'Austrian school', often called a 'right-wing think tank' by those who do much to stigmatise, disparage, strawman, but rarely deconstruct, libertarian economic theory.

Because of its size I'm only yet a quarter of the way through it, so I suppose I should redouble my efforts. There's not much practical use for me in its 'right-wing talking points', since I don't spend time in bars with twenty- and thirtysomethings, but hey, somebody out there said that reading three books on any subject is sufficient to make one an expert on it. 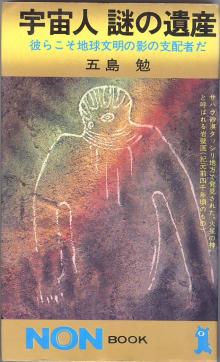 I'm about halfway through my monthly Japanese effort, and this again is one that sat on my shelf unread for a number of years. The title (which translates roughly as 'the enigma of extraterrestrial heritage') must have caught my eye at a second-hand bookstore at a time in my life when my Japanese was not quite at a sufficient level to permit me to read genuine material for grownups. Now that I'm into it I can see what actual sort of grownups go in for this stuff, and I've had the misery of being acquainted with a number of them right here in Tottori, believe it or not. There are people around us--some of whom have PhDs--who believe that humans never walked on the moon, the Holocaust was a hoax, and aliens built the pyramids in ancient Egypt.

As far as I know, Ben Goto has remained silent on the first of that trilogy of popular conspiracy theories, but the Japanese Wikipedia associates him with the idea of the Jewish conspiracy. Having partially read only one of his lucubrations, I cannot comment on whether or not he is a rabid anti-Semite, but a quick internet search reveals him to be one of the most prolific, widely-read, and utterly crackpotty conspiracy theorists in Japan, if not in the entire world.

One of my favourite particular tidbits from this tome is the author's testament that the medieval Piri Reis map unearthed in a palace in Turkey was so accurate a representation of the entire earth that it could only have been drawn by someone looking down at the planet from space. Goto asserts that the accuracy of the coastlines of all the islands and continents is indubitably beyond contemporary knowledge and could not have been compiled from different maps as the archaeological community holds. (In fact, the map is laughably inaccurate, confuses Australia with Antarctica, and plots the Virgin Islands in two different places.)

Still, I have to give the book the full thumbs up because it does such a conscientious job of synthesising the 'groundbreaking truths' of such theorists as Erich von Daniken and A. Gorbovsky, and he credits himself with being the only UFOlogist so far who has united the 'evidence' for the lost continents of Atlantis, Mu, and Lemuria, and discovered that they were different parts of the same land mass whose inhabitants were more scientifically advanced than we.